The Interesting History of Apple

Apple was founded by the ‘two Steves: Steve Jobs and Steve Wozniak. They were two very different teenagers, but both are geniuses in their own way. Both Steve’s grew up in San Jose, California– now better known as Silicon Valley.

Before they became billionaires and founders of the coolest company in the world, they were teenage outcasts. Three decades ago the two Steve’s were mere college dropouts, Jobs from Reeds and Wozniak from Berkeley. The two Steve’s met at Hewlett-Packard, while Jobs was working as a summer employee and Wozniak as a calculator manufacturer.

You might also like to read about the history of Adobe Photoshop, Web Forms, Google Doodles, Online Shopping, or Social Networking.

The Woz was an especially gifted engineer of his time, making and selling illegal devices that he made. One particular device allowed users to make free long distance calls (which was a big deal in the 1970s  when long distance calls were expensive).

Wozniak had done so by hacking into AT&T’s long distance network. An ironic beginning if you think of it, since AT&T is now perhaps one of Apple’s most important business partners.

Later on, Jobs convinced Wozniak to make self-made computers with him. While Steve Wozniak merely enjoyed creating machines, Jobs had always seen the marketability of personal computers. To start their own company, they sold their most precious possessions.

Jobs sold his Volkswagen Bus and Wozniak sold his programmable HP calculator. They gathered $1,250 and started their business in Jobs’ basement. 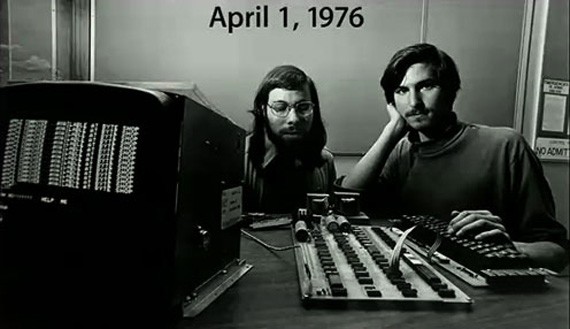 Start of the Great Company

It was in Steve Jobs’ tiny basement that they invented the first personal computer. On April Fool’s Day, 1976, Steve Jobs and Steve Wozniak released the first Apple I computer and started the company Apple Computers. 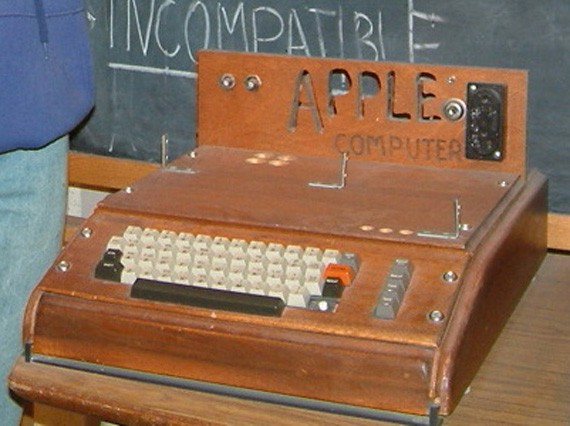 The first Apple machine made use of a TV as a display system–a great addition since most machines of the time had no display at all. Text was faster than teleprinter at that time, typing at 60 characters per second. It also had a bootstrap code on ROM for easy start-up.

Byte Shop, a local computer shop, offered to buy 50 of the computers if it came fully assembled, paying US $500 each. The two couldn’t afford to pay for the components, so Jobs approached Cramer Electronics to get components on 30 day terms.

With that, the two Steve’s spent days on end building the computers, delivered it on time and paid his supplier with a neat profit for their efforts and for the next order.

Steve Jobs invited Ronald Wayne, a 41-year-old former colleague from Atari to join in their Apple start-up. Jobs offered Wayne 10% of the company, although he kept his job at Atari and worked for Apple at night. The partnership with Ronald Wayne didn’t last long, though.

Twelve days after Apple’s release, Ronald Wayne sold his 10% share for US $800. A meager sum if you consider the fact that Wayne’s 10% share would’ve been worth US $35.3 billion today.

After Apple I, Wozniak now thought about making a bigger and better machine. Since they now had the money from the sales on their first computer, Wozniak moved on and made an improved version, the Apple II. The computer was presented on April 16, 1977 during the West Coast Computer Fair. 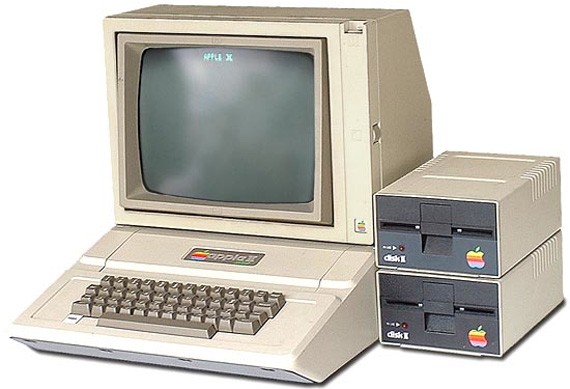 The Apple II, also known as the Apple ][, became known as the most popular computer of all time. The TV interface was completely redesigned. It could handle text, graphics, and later on, color. It became more ready-to-use than its predecessor, since the Apple I required you to plug parts together & type the code to run the program.

By this time Apple needed more money to grow as a company. The solution came from an angel investor named Mike Markkula, who was referred to him by Don Valentine and in turn was referred to by Regis McKenna. Valentine, after first meeting the young and unkempt Jobs, told McKenna: ‘Why did you send me this renegade from the human race?’

He was uninterested in funding Apple, but recommended Markula. Jobs visited him and convinced the would-be investor the market potentials of personal computers. Markkula invested $92,000 in Apple and a bank loan of US $250,000.

Markkula held a huge influence particularly in the formative years of Apple. Wozniak even credits Markkula for Apple’s success more than himself. He provided the adult supervision to the young Jobs and Wozniak. He served as a mentor to Jobs teaching him the the ins and outs of business and management.

Aside from helping the company obtain credit and capital, he brought in Michael Scott to be the first president and CEO of Apple.

He promised his wife to stay at the venture for four years, he eventually stayed for two decades. Markkula is responsible for recommending the floppy disk drive, after Markkula discovered that the checkbook balancing program he had written was too slow on the data cassette.

Apple’s most famous success is the famed Macintosh. It was the first computer to successfully use a graphic user interface and mouse. The series was thought of by Jef Raskin, an Apple employee who envisioned a low-cost, user-friendly computer for the everyday customer.

Macintosh was named after Raskin’s favorite type of apple. Jobs was working on his own Lisa computer during this time, but immediately took over the Macintosh project when the failure of Lisa was clear and the future of Macintosh was bright. See the 1984 Macintosh ad here. 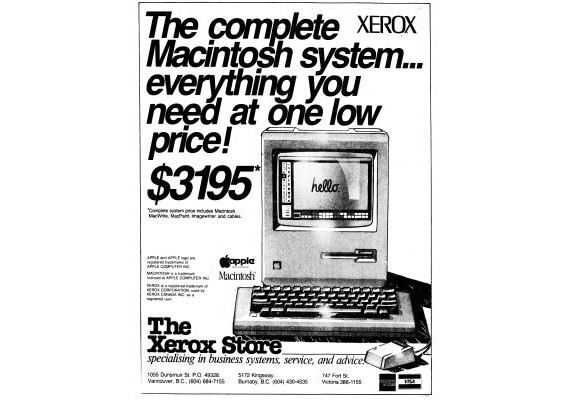 Image from Quality in Print

By 1980s Jobs was still young and unexperienced. He made many marketing mistakes that greatly affected Apple sales. Jobs still lacked the discipline to run the company . Thus Jobs lured Sculley away with the pitch: ‘Do you want to sell sugar-water for the rest of your life or come with me & change the world?’ 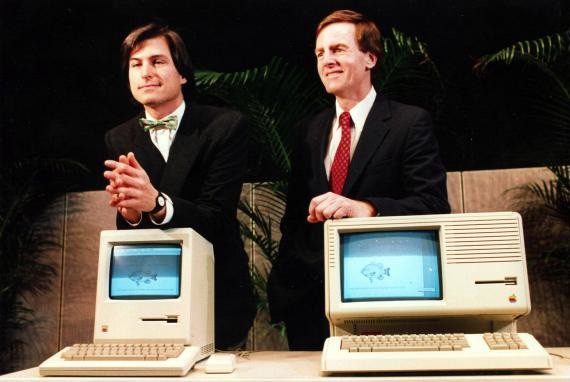 Jobs and Sculley during their ‘friendlier’ days

Sculley was believed to be the perfect choice into bringing business success, stability and management know-how into the company. He raised the Macintosh price from US $1,995 to US $2,495, to use the extra money for advertising campaigns.

There was an internal power struggle in Apple–Sculley and Jobs regularly clashed. Sculley was traditional, but Jobs was more non-linear: he held meetings after midnight, and called new meetings early in the morning. In the end, the board of directors including Mike Markkula sided with Sculley. Jobs left Apple consequently, his pride in tatters.

The Era of Apple without Jobs

Come 1990s, the IBM PC was now dominating the operating system industry. Apple tried to battle the PC threat by introducing Quadra, Centris and Performa. The new Macintosh computers failed miserably, partly due to poor marketing, plus too many models introduced with minor differences in the tech specs. Aside from the computers, Apple released an early personal digital assistant or PDA (they coined that term, in fact) called the Newton. The venture failed, but it would later be the inspiration for future handheld devices such as the Pocket PC and Palm Pilot. 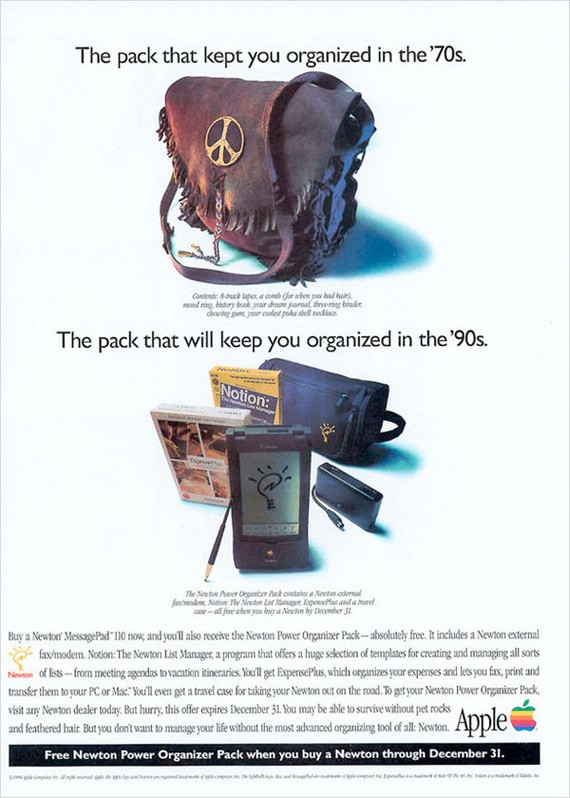 By this time, Apple was considered ‘one of the worst managed companies in the industry’. John Sculley was then replaced by  Michael Spindler, and in turn by Gil Amelio. Stock value was low, and the company was losing billions of dollars. There was no visionary to lead them. How could Apple survive when the founders are no longer active?

Meanwhile, Jobs acquired Pixar, a visual effects and animation company. Soon afterwards he founded another company called NeXT. The computer venture did not succeed because of its high price, but it later became the basis for the Mac OS X. It also became the initial platform for Tim Berners-Lee with inventing the World Wide Web concept.

Since Steve Jobs’ comeback, Apple regained its former enthusiastic spirit. From 1998 to 2000, their sales were slowly but surely rising. One of Jobs’ first moves as CEO was to develop the iMac, with the integrated CRT display and CPU in a clean, streamlined design. The computer was a huge success, selling one million units a year.

There was a resurgence of Apple products and the company started to focus on the design and aesthetics of its products. 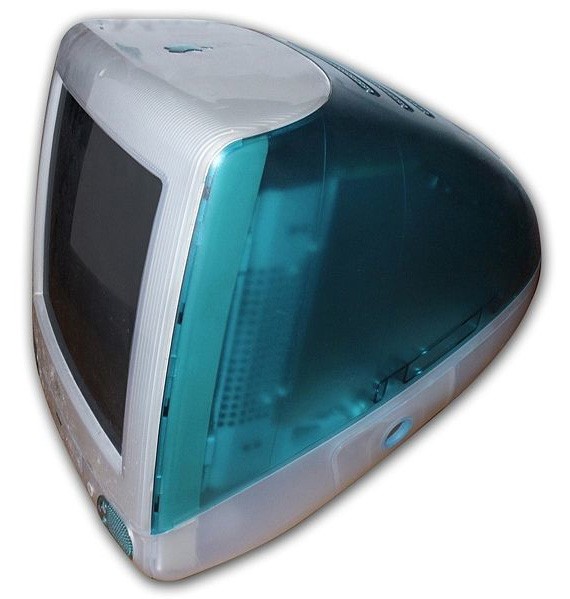 Later on, the company would introduce other innovative products like the iBook and the Power Mac G4. It also introduced the new operating system Mac OS X, which had been based on NeXT.

But the boom of Apple’s success today can be traced back to one gadget: the iPod. It was released on October 23, 2001 The iPod can store ‘1,000 songs in your pocket’.

It was Apple’s first venture in digital music players, a gamble that paid off so well that it led to other innovative products: the iPod Mini, Shuffle, Classic, Nano, and later the iPod Touch, iPhone and the iPad. 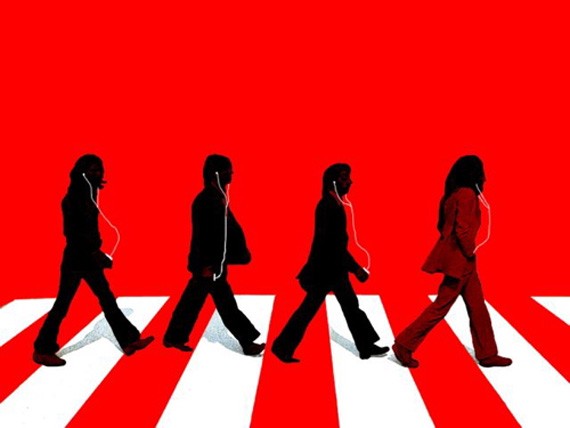 Apple later released a Windows version for iTunes, further expanding their market base. 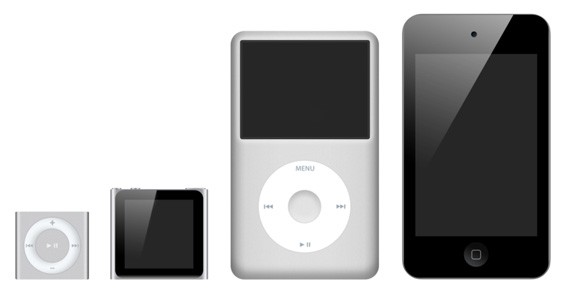 The iTunes Store did not stop at that. They later provided free and paid videos and applications for downloads for the iPod, iPhone and iPad. 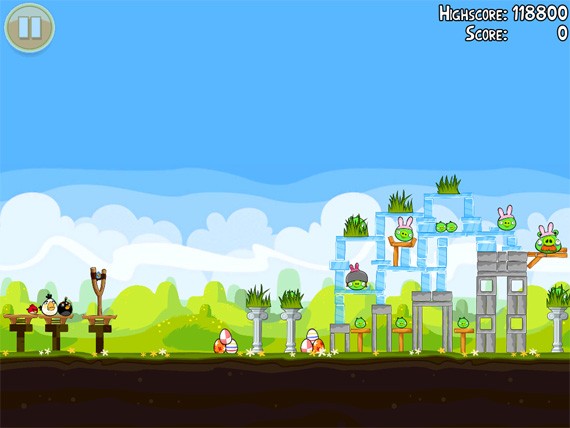 Today’s Apple products are simple, clean and minimalist. Everything is simplified: all the unnecessary features are taken out and only the essentials remain. And because of its style and simplicity, Apple created a huge fan following and has grown exponentially over the decade.

On May 26, 2010, the stock market of value of Apple overtook that of Microsoft. It was the only time in 20 years that Microsoft was lower than Apple, which would’ve seem ‘unimaginable’ 10 years ago. 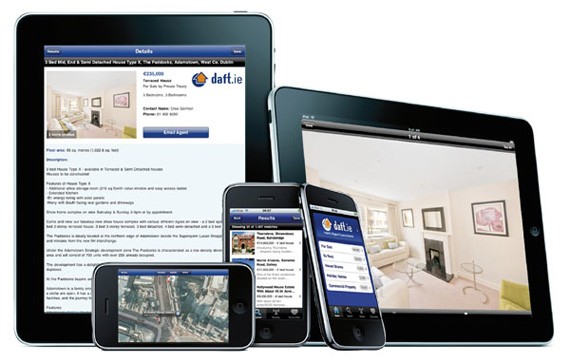 On August 25, 2011, news went out that Steve Jobs had resigned as CEO of Apple, and would be succeeded by Tim Cook. On October 5, 2011, Steve Jobs passed away due to complications of pancreatic cancer.

The Bright Future of Apple

What are Apple’s most recent plans? The iPhone 4S, the Mac OS 5 and the iCloud, for starters. The iPhone 4S is quite exciting, especially the Siri feature. Siri lets you use your voice to command various functions: send messages, make calls, schedule meetings and more. Siri can recognize your voice, understand what you say, and can even talk back. If you don’t believe us, you can see the video here. 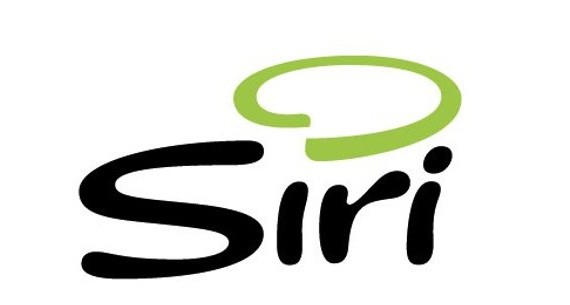 Before Jobs’ death, he recently unveiled Apple’s plans for their new headquarters in Cupertino. The modern and futuristic building allows room for 12,000 employees. It is environmentally friendly and will use renewable energy sources and trees will be abundant in the area. The company hopes to move to the new headquarters by 2015.

Indeed, the passing away of Jobs was too early and too unexpected. But the timing couldn’t have been more right–the iPhone and iPad were a huge success that it surpassed the company’s expectations in revenue and profit. Apple can finally stand on its own, ready to conquer the future without the help of Jobs’ regular involvement. After Jobs, Cook is now the CEO as design genius Jonathan Ive and marketing mastermind Phil Schiller, and they will continue to surprise and inspire us. 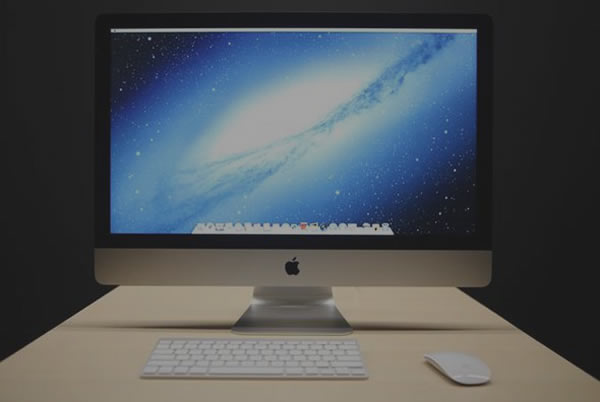 The Beginners Guide to Setting up Your Brand New Mac

The Beginners Guide to Setting up Your Brand New Mac