Does Gutenberg Address the Needs of the Average WordPress User?

With WordPress in the process of preparing the new Gutenberg editor for full release in version 5.0, there are a ton of opinions on the change. I recently witnessed a demonstration of what the editor can do, and the presenter could barely get a word in. A healthy mix of designers, developers and users in the crowd were asking questions and debating the merits of the project. I don’t know that I’ve seen an impending change to software cause this much debate since Adobe stopped selling physical copies of their apps.

But instead of adding more gasoline to the fire, I think it’s important to look somewhat beyond the debate and take a look at what Gutenberg is actually meant to do.  So, what is the purpose of replacing the classic editor we all know and sort-of like? WordPress.org tells us:

“The Gutenberg editor uses blocks to create all types of content, replacing a half-dozen inconsistent ways of customizing WordPress, bringing it in line with modern coding standards, and aligning with open web initiatives. These content blocks transform how users, developers, and hosts interact with WordPress to make building rich web content easier and more intuitive, democratizing publishing — and work — for everyone, regardless of technical ability.”

There you have it. And while the editor hasn’t been fully-released just yet, the ever-changing plugin version has given us a pretty good feel for how things work.

This all brings up a couple of questions. First, what (if any) real pain points exist that Gutenberg is trying to fix? Second, will this editor achieve the stated goals? Let’s find out!

The Simplicity (And Potential Downsides) of a Classic

At first glance (before themes or plugins add extra clutter), the classic WordPress editor is quite a feat of simplicity. To those who are new to the CMS, they see a friendly little box with a toolbar attached. It’s very reminiscent of a word processor. That’s something just about any computer user recognizes and it helps to bring some level of comfort to those just starting out.

We often talk about the onboarding process of a website or an app. WordPress has gotten better at it over the years, but there really hasn’t been a major need to do anything special with the editor itself. It’s just plain simple and intuitive. I think it’s safe to say that most users just “get it”. 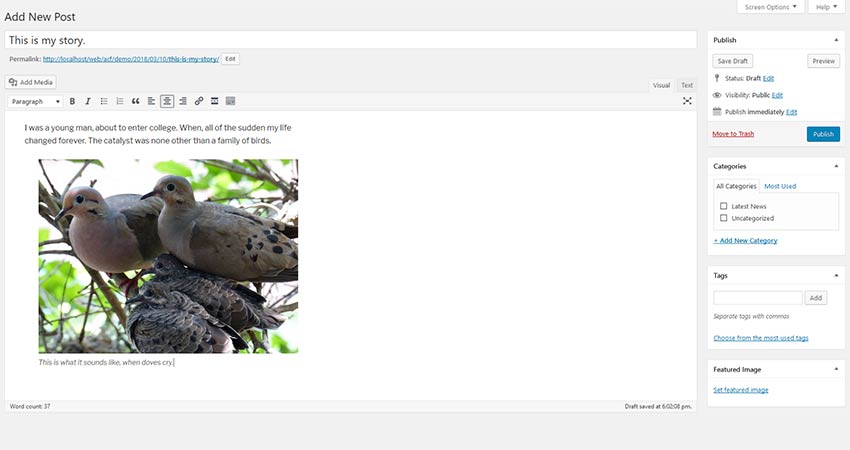 There’s something to be said for the ease of getting started. But like anything else, you don’t really know what something can do until you start working with it. Depending on your particular needs, the user experience with the classic editor varies.

If you’re working with simple content that includes some formatted text and images – you’re probably quite happy with the classic editor (regardless of its quirks). But if you’re trying to do something a little more advanced, you might have found that it’s difficult to do everything you’d like with this setup.

In a nutshell, that explains the popularity of page builder plugins. They replace the simplicity of the classic editor with various states of complexity. Of course, some of these plugins work better and are more intuitive that others. But they exist because users wanted a way to do the things that the default configuration doesn’t offer, like:

Page builders, for better or worse, usually help with these challenges that everyday users face. It’s not a coincidence that, by far, these are among the classic editor’s Achilles heels.

Time for a New Way of Thinking

It’s been said that Gutenberg isn’t meant to replace page builders. But it’s hard to argue that this new editor isn’t at least somewhat inspired by them. It stands to reason that, when figuring out the direction for the project, the development team had to have looked at the good, bad and ugly of builder plugins to help determine what to (and not to) do.

Even if there are tidbits of inspiration, Gutenberg isn’t your standard page builder – at least not yet. Instead, we go back to this line from earlier: “…replacing a half-dozen inconsistent ways of customizing WordPress.”

With the classic editor, you had to jump through hoops to do things that a modern content editor should be able to help you accomplish. And even if you did accomplish it – you had to find roundabout ways of doing it. Not to mention that these setups are incredibly fragile for anyone who needs to make edits later on.

Plus, there are also dozens of somewhat-hidden features that casual users of WordPress may not have known about. Things like embedding social media content work incredibly well – if you knew they existed in the first place.

Gutenberg’s aim is to allow users to separate out content into different “blocks”, while also making everything WordPress has to offer available within a click or two. The idea is that content is often not just straight text – it’s a conglomeration of different types of media and layouts. Regardless of the other fuss, this is the core of what Gutenberg is.

There Are Still Mountains to Climb

The more I play around with Gutenberg, the more I like it. It’s effective and efficient for putting together content in different ways. There’s a flexibility that should fit in with a variety of workflows. Instead of users having to either conform to creating content in a straight line or adding an extra layer of functionality through a plugin, this should suit most needs just fine.

I think the biggest issue is going to be selling this first generation of users on its value. This is a major change – not only to the editor itself but the edit screen as a whole. Even if Gutenberg really is better, there are going to be a lot of people who are resistant to change. When people perceive a loss of comfort (whether or not they actually experience it), it’s a tough nut to crack.

The other part of this is that many of us who build websites may want to turn off the editor the minute it comes out – at least for our clients. There is a good bit of worry (including from yours truly) about whether this change will be compatible with certain must-have plugins or customizations. No matter how much we’re told that this or that will be fine, we won’t really know until we actually see everything in action.

There’s virtually no doubt that there will be bugs to squash. It’s a matter of how severe and widespread bugs are – not to mention how quickly they are fixed. That’s going to be crucial for getting developers excited. If the majority of us can breathe a sigh of relief when we see our sites working, that bodes well for the long-term future of Gutenberg.

Compatibility will also be huge for the average non-developer user as well. Beyond that, it’s about getting people to dig in without too much fear. Users are often wary of the unfamiliar. But all it takes is a small success or two (“I just set up a page, woohoo!”)  for confidence and comfort to build. 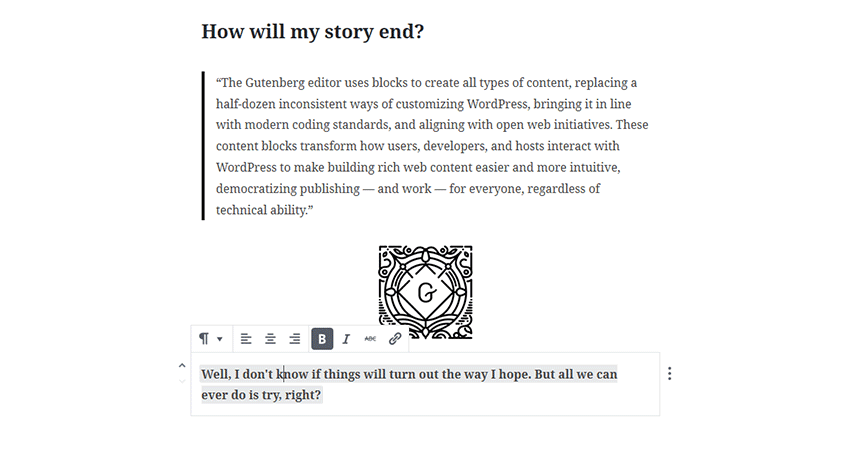 Does Gutenberg Have the Goods?

So, getting back to the question of whether Gutenberg addresses the needs of the average user. I think it depends on your perspective. If you’re looking for this editor to be the greatest invention of our time, you might not be 100% sold (despite the lofty namesake).

There are those who look at this as an attempt to beat back the competition nipping at the heels of WordPress. Again, this is highly subjective because WordPress is a different sort of animal compared to the Wix and Squarespace crowd. It’s the classic battle of apples vs. oranges, indeed.

But if I’m looking at Gutenberg purely against the content creation process that WordPress previously gave us – it’s hands down better. That doesn’t mean it’s going to be perfect in every way or even has to be.

In that way, I’ll say “mission accomplished”. But to succeed over time, the editor’s compatibility and UX has to be top-notch from the beginning. It will be fascinating to see how that part of things unfolds.