Beauty vs. Functionality in Web Design

The thought of producing the best possible design, either from scratch or redesigning something, sends jitters to the very heart of many designers. Even professionals in the field can’t quite balance beauty and function.

Let’s agree that there are certain facets of designing that take longer than others. An example is website design, it takes a vast amount of time to produce the optimal result the client wants.

There are designers who have really bad experiences dealing with clients because the purpose of the website does not jive with the design the client wants. In which case, the two need to strike a bargain.

Looking at a website, logo, or a poster and telling yourself, “well, it could be better” should always be followed by thinking about the users. Are they already accustomed to the current design, that if a change is made they’ll hate it?

Designing to solely improve the beauty is quite tricky. Trickier than adding functionality or information because a redesign means a change of identity. Now we’ll focus on web design, but keep in mind that this applies to all things that can be designed. In web designing, why do people have to redesign? For two reasons: 1. the existing design sucks, and 2. a fresh look is needed.

Reason one is the most used reason for redesigning, and is somehow less tricky because people will see the improvement and most likely love the new design. Just keep in mind that you are redesigning for ease of access, to make things better than what they used to be.

Reason number two is the trickiest. Redesigning just to keep things fresh is not really a good practice. There is a 50-50 chance that if the previous design is loved by people and a sudden change is introduced, people might hate the change which could result in a drastic decline in readership, like what happened to Digg and the Gawker Network (fairly recent).

Nothing fancy here, just straight to the point like most news websites. Actually, if you look at news websites you might get dizzy at first because everything appears to be scattered. These websites take quite some time to get accustomed to, but once you know the basic navigation, all is well.

A perfect example is Reddit. Over three years ago, when I first arrived on the website, I said to myself, “man, this website’s design blows” but as I spent several minutes and hours there, when I’m already accustomed to things, I’d rather have it stay that way than to have fancy colors and logos and things. Why? Because the purpose is to read, share, and view different media from external sources. 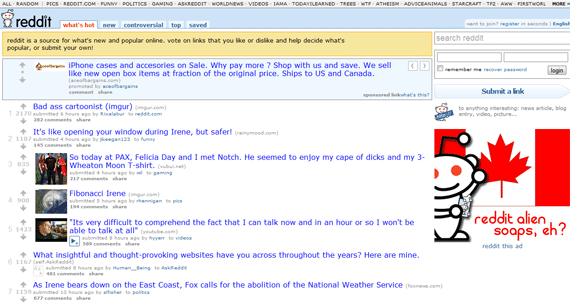 Another perfect example are management systems and eCommerce websites like eBay. I think you already know where I’m headed, designing for function is more about serious business.

The problem with redesigning

In art, there is no such thing as a finished piece. Everything is abandoned. No art is finished and perfect. But when is the right time to pull out that brush and stroke the canvas once again? I’m afraid that’s a grey area even for most designers I know. Why redesign? It looks good and it already serves its purpose, doing more may confuse your audience with the sudden change.

As you may have experienced, people have the propensity to reject changes. But there is a way to introduce change without irking people, and that is by gradually changing things, not a full-blast update. Take for example Facebook. For several years the layout has changed incredibly, there were fiascos (like the recent chat box update) and there were several successes, all without alienating the existing users.

But I didn’t answer the question, “why redesign?” You redesign when a function is needed and it changes the layout of the entire design, but only redesign if it will complement the site well. As I have stated in my previous article, the purpose of redesigning is to make things easier for the users.

Why can’t it be both?

Like people, artists and their masterpiece are unique creations. These artworks have their own personality, and that their “purpose” may or may not be positively taken by the audience. To the artist his/her creation might be a masterpiece, but is it for other people?

Take for example Digg’s redesign. It was big news a few years back because they lost a big fraction of their users because of the redesign which they thought would be good, but really isn’t for “old timer” Digg users. That is how severe the redesigning process can affect things if it isn’t done right.

One thing to remember

Designing can be two things: for beauty and for function. It’s like saying “beauty and brains,” only it doesn’t work that way. One thing you need to remember when faced with a design project is that you need to figure out what is really needed. Does the material need to call out to people more or is it for a specific function.

One thing to remember: never use the color blue just because it’s your favorite color.

The problem with users

Audience are fickle creatures. Most of the time it only takes one angry reader to cause a large avalanche of people to follow them.

We’ve seen this happen on the internet many times now, even outside the field of designing, where someone convinces people that Company X’s service is not good, then the whole internet brigade of justice brings out their pitchforks (or are they internet mobs?).